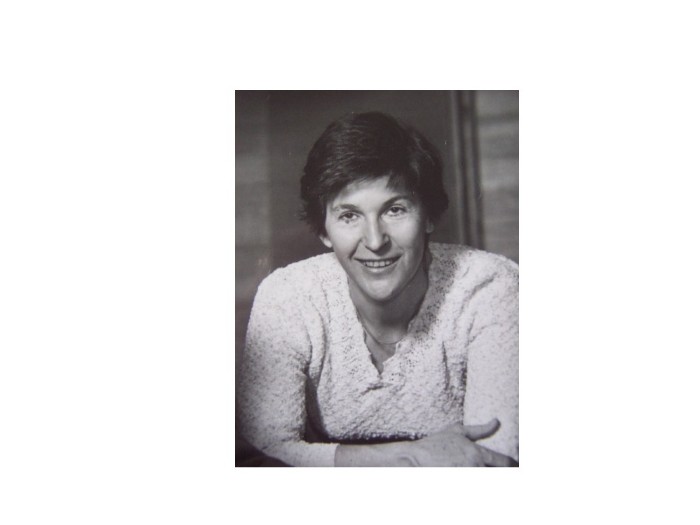 MARGARET F. HOOD, fortepiano and harpsichord designer and maker, died June 7, 2008. Margaret was born Nov. 19, 1937 in New York City and grew up in Greenwich, Connecticut. She graduated from The Greenwich Academy in 1954 and continued her education at Mt. Holyoke College in South Hadley, Massachusetts where she pursued her interests in philosophy, religion and art. Upon graduation cum laude from Mt. Holyoke in 1958 Margaret continued the pursuit of her intellectual and academic interests at the Pacific School of Religion in Berkeley, California. Along with her academic work Margaret did calligraphic and artifact restoration work for the Bade Archeological Museum at PSR. At graduation in 1961 she was awarded a Danforth Fellowship at Duke University for the following year. Margaret's youthful love of horses remained with her throughout her life. She developed her skills not only in riding but in training in the English traditions of jumping, cross country and dressage. Boxes of ribbons attest to the level of her success in horsemanship. Margaret came from a family of painters and she continued the tradition with an extensive repertoire of styles and techniques. She added to that tradition by applying her artistic talents and skills to the painting of historically appropriate paintings and decorations on the lids and soundboards of harpsichords. In the 1970s Margaret began a career as a builder of historically correct reproductions of early keyboard instruments, harpsichords, clavichords and fortepianos. She was for a time an agent for Zuckerman Harpsichords and then, after extensive research in Europe and the US, she founded her own company, Margaret Hood Fortepianos [http://fortepianos.pair.com].She proceeded to build instruments of her own design, based on her research and analysis of surviving original instruments and the written records from the time in which the instruments were built. Her instruments and her scholarship have earned her a national and international reputation as a builder of exceptionally fine instruments, particularly reproductions of the pianos of Nannette Streicher, whose instruments were highly praised by Beethoven and were his preferred choice to play in performance. Margaret also earned national and international recognition among Beethoven scholars and early music performers for her research and publications with regard to Beethoven and the instruments of his time. In addition, Margaret wrote and published two technical manuals, one on repair and maintenance of harpsichords, and one on repair and maintenance of fortepianos. Margaret was united in marriage with C. Ellsworth Hood in 1961. She is survived by her husband, Ellsworth, her daughter, Vivian Andrea, and her son, Thomas William. With her passing the world of music has suffered a loss of immense proportions and her family a loss greater still. A private memorial celebration of Margaret and her life will be held by the family at a later date.

Margaret Hood Fortepianos recreate the colorful ringing tone and responsive lightness of touch of their famous prototypes, the fortepianos of 1803 and 1816 by the Viennese pianomaker Nannette Streicher. Instruments from our workshop are fully guaranteed against defects of workmanship and materials. They have given rewarding and reliable service in concerts and on tours with amateurs and professional musicians here and abroad. They have been a source of hours of delight in the homes of their owners. Your satisfaction is our greatest pleasure.

We have been making and servicing Viennese reproduction fortepianos since 1976. Our instruments are owned by colleges, universities and professional musicians in Canada and the United States, and have been rented by symphony orchestras, opera companies, university and community orchestras, and music festivals. We regularly have one or two instruments to see and play at the Boston Early Music Festival and other regional music festivals. Please contact us to arrange to see and try one at one of these events or at our shop in Wisconsin.

Our New Project: a Streicher grand from the early 1820's 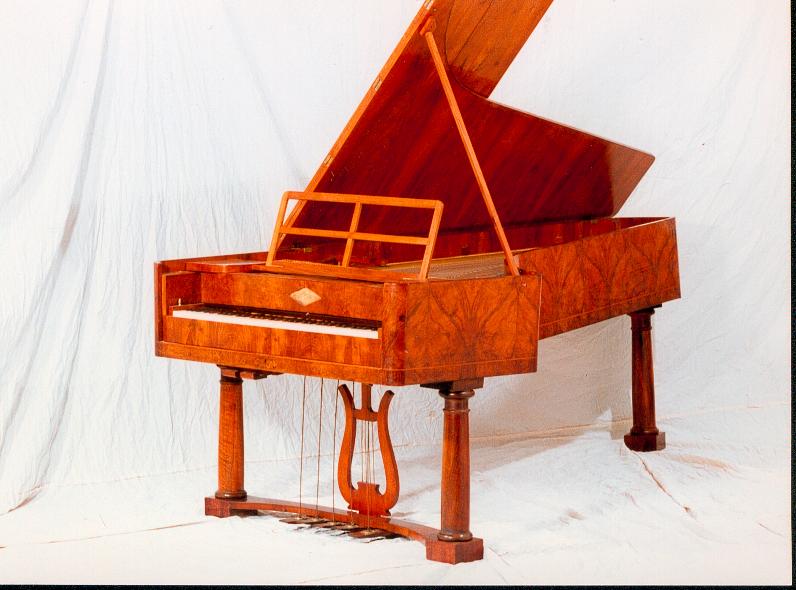 Nannette Streicher was the daughter of J. A. Stein of Augsburg, whose pianos delighted Mozart. She assisted her father in his workshop from childhood on and inherited the business at his death. She and her composer husband J. Andreas Streicher moved the business to Vienna; Beethoven's letters from 1796 on reflect his involvement with the Streichers and their pianos. He had the loan of Streicher pianos regularly throughout his keyboard composing years; he frequented their showroom and Sunday concerts, as did all the other notable Viennese composers such as Hummel, Cramer, Moscheles and VonWeber. The firm continued as one of Vienna's most prestigious until the 1890's. 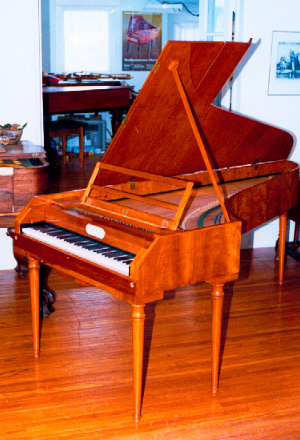 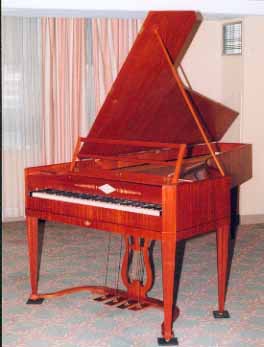 New! A Lid Painting for your Harpsichord!

The Fortepiano Maintenance Handbook and The Harpsichord Repair Guide
The Handbookand the Repair Guide continue to be available.

Nannette Streicher and Her Pianos - an Article from Continuo Magazine, being entered in sections with bibliography

Continuation of the Article

"Coloristic Effects of Viennese Fortepianos", a talk given at a MHKS meeting at Duke, 2004