A Grand Piano of the late 1820's, after Nannette Streicher

We have begun one of these instruments, which is based on several Streicher fortepianos from 1820 to the time in 1824 when Nannette's son Johann Baptiste Streicher took over the direction of the workshop. These instruments represent the last bloom of the Classical Period fortepiano, including the effects of the growing Romantic sound and style. Although Nannette Streicher continued to participate in the business after 1824, these are her final design series before her retirement.Late Beethoven, Schubert and Weber, among others, are especially well-served by these pianos.

The case style is similar to the instruments of the period 1810-1820, but with Biedermeyer touches like the rounded lines and pillar legs. They were made in both six and six-and-one-half octave models; They had either four or five pedals, including damping moderator, optional half-moderator, bassoon, una corda, and optional due corde on its own pedal. Many had "Turkish Music" added by third-party installers; the Streicher shop resisted these enormously popular but somewhat non-musical effects. These were a bell or bells and a drum installed inder the soundboard. operated sometimes by knee-levers and sometimes on a pedal stolen from a normal function. I am as reluctant as the Streichers were to get involved in these added features. 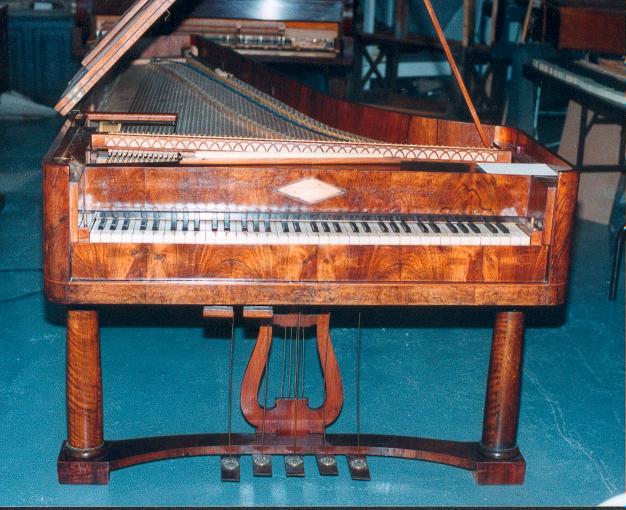