Terms: Payment is in US dollars. A $500 deposit is required at the time of the order, which is refundable on cancellation. One third of the price plus applicable sales tax is due when the work is begun. One third is due when casework and stringing are done; the final third is due upon completion. A thorough service checkup is included at the end of one year. Delivery by arrangement. Satisfaction is guaranteed.

One of these pianos in Cuban Mahogany will be completed and available at the end of the summer, 2003. 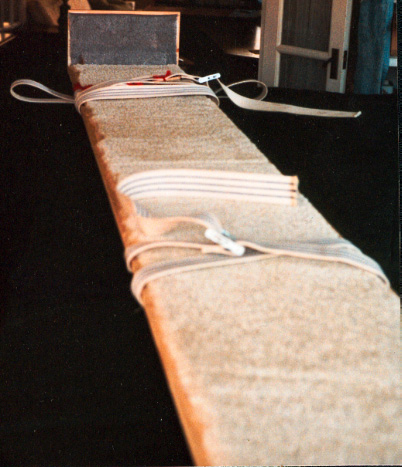 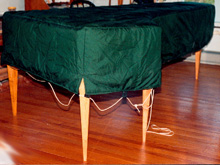 Oversoundboard of quarter-sawn spruce. This sits upon little blocks around the inner case rim, suspending it above the soundboard. These were common during this period in Viennese instruments, and serve to soften and blend the characteristically bright sound of the instrument for home playing, as well as balancing the bass and tenor with the treble section, which is left uncovered by the shape of the board. Easily lifted off and set aside for concert uses.

The five-pedal option for the six and one-half octave piano. In addition to the four described above, the due corde has a separate pedal.

Wheeled caster cups(3), a convenience for on-stage moving. These are small, each with three wheels, and are easily slipped under the front spine leg, cheek-bentside corner leg and tail leg, to move the instrument without disturbing the pedal. The instrument can be played sitting on them for rehearsals if desired. 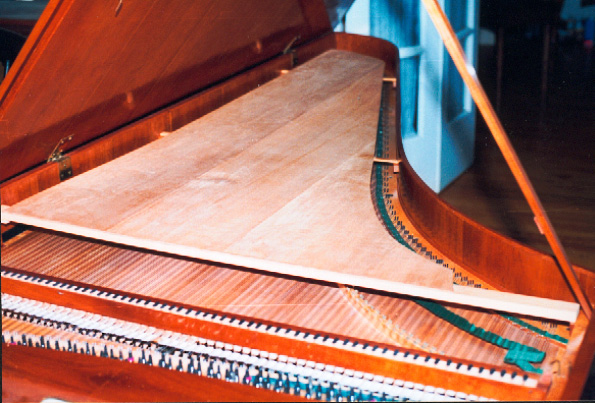 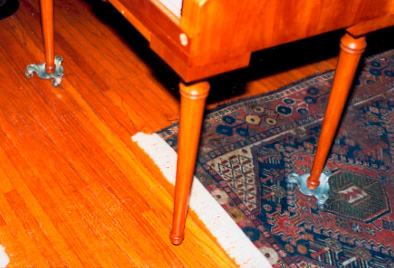 Our shop is going at full capacity, just managing to keep the waiting time for new orders under control so far, and getting other service jobs and restoration projects moving along as well. There is our fifth copy of the 1816 Streicher Viennese grand in the Yale Collection, coming along well in the downstairs shop. It is being veneered in real Cuban mahogany and will be closer to the original than previous ones, due to another close look at the original last summer. The mahogany is gorgeous - Here are some pictures of the newly done bentside. No varnish yet, only wet down to show the color. 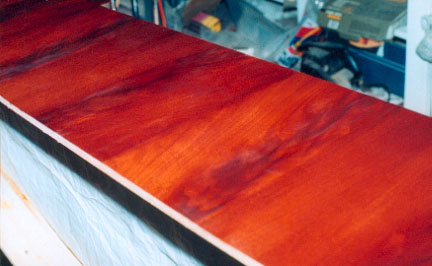 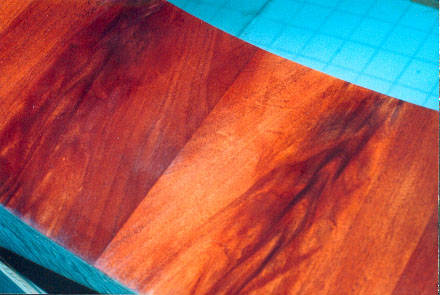 There is a partly done (by a piano technician, a good start) French double Hubbard kit which will eventually be finished for someone who suits it. We build occasional harpsichords by special request; click here for some photos of past work.

The longstanding project is a painstaking restoration of an 1860's Viennese grand (an antique one), maker's name Schrimpf. It's an excellent quality instrument, burl walnut, a big rich sound and light Viennese action. Much veneer repair needs to be done, and the pedal lyre is missing and must be made copying one from a similar instrument. The action is not too far along either - a big project, done in spare moments. Click here for a description and photos of this and other old instruments we've done.

On a 1803 Streicher copy made by Hood Fortepianos: Beethoven, Das Gesamtwerk fuer Violoncello auf Historischen Instrumenten. Paul Pulford, Violoncello, Boyd McDonald, fortepiano. EBS Records 6030 We also have informal tapes on several of our instruments; we can make and send you copies.

Recordings of other copies of Streicher instruments: Schubert Impromptus, Melvyn Tan, fortepiano by Derek Adlam after Streicher 1814 (6 octave) EMI CDC 7 49102 2. This has a less full sound than the 6 1/2 octave instruments.

Listing of Instruments used or for rent

Return to Top of Page